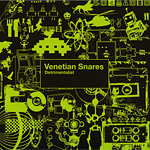 Detrimentalist is without a doubt Venetian Snares’ most junglistic effort to date. It is a wonderful album in that respect, up there with classics of the genre (Remarc, Grooverider, Goldie, you name them). It does not lack the proverbial VSnares touch, in this case, a kind of what could be termed “Internet humor” (not so funny for many), and a dexterity and plasticity with breaks that some of the aforementioned producers never dreamed of.

Aaron Funk is the utter alchemist of the break, the “Amen” break in particular. Not only can he sculpt it into anything he wishes, he can transform it into any material, from plasticine to rubber to steel to ammonium nitrate and back.

That said, Detrimentalist feels like just another Venetian Snares release of late: it owes too much to VSnares tropes. I am not suggesting creative stagnation, but the inventiveness and playfulness of previous efforts (Doll Doll Doll or Winter in the Belly of a Snake) is missing. These tracks sound great, but formulaic. Maybe it’s the accumulation of them (and of formulaic releases in general) that’s curbing my enthusiasm.

For someone as productive and creative as Funk, records like Detrimentalist seem to belong to the pastime category: the stuff you do on auto-pilot while you wait for the muse to come up with something bold and personal. The life in peril metaphor comes in handy here: sometimes the population needs a good shake, like in an earthquake or flood, in order to get reinvigorated and in love with life again. And it’s been a long period of peace and prosperity in Snaresland.