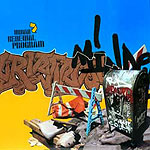 To be honest, I’m disappointed by this comp. Rapid Transit was an instant favorite, but here Chocolate Industries tries its hand at straight-up hip-hop. The production may be slick, but most of the rhymes are weak. Aesop Rock’s “Train Buffer” isn’t half-bad until it disolves into an unfunny rant about looking for a prostitute. On “Wanted,” Mr Lif’s voice is too weak for his break, and his rhymes are uninspired. “Know that it’s impossible to stop this….” Yikes! Likewise, Souls of Mischief’s lyrics are routine (they can never top 93 ’til Infinity), and their voices are buried in the track.

The only highlights are Prefuse 73’s slight reinterpretation of “Radio Attack” and Mosdef and Diverse’s “Wylin Out.” (Although my favorite mix of the latter is only available on the 12″.) Diverse’s “Time” is pleasant as well, although it sounds like he’s reading a rhyming dictionary—his poetry’s pretty vague. All in all, I’d hold out for a more solid collection. Let’s hope this isn’t a sign that Chocolate Industries is turning into a mediocre hip-hop label.