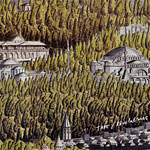 There seems to be an unwritten rule in the world of electronic music that links quality with poor distribution. It’s peculiar that many of the albums I have been longing to hear these first months of 2011 are not really available on the market, have a very limited release, or are often sold out days after being printed. Who to blame? Extravagant artists fond of their signed, artsy CD-R releases? Too much music on the market? Digital format killing the pleasure of owning vinyl or CDs? While I try to solve this enigma, I’m rushing to the record shop at the corner in order to secure one of the few hundred printed copies of Tape’s Revelationes, fifth album of the Swedish trio, for the small Häpna imprint.

It doesn’t take me long to like Revelationes, as it didn’t take me long, back in 2008, to consider their previous album, Luminarium, a little music gem. Three years later, brothers Andreas and Johan Berthling with Tomas Hallonsten have finally released seven new songs of evocative atmospherics, and despite the short length (thirty-three minutes), Revelationes is another top-quality work.

Defining the genre is a bit tricky here and is really up to each listener. I find Tape’s music to be at the crossroads of ambient electronica, drone, contemporary classical, and electronic folk. There is concept and experimentation, there’s traditional song structure and ambient soundscaping, all expertly executed and mastered. Listen to “Hotels,” which opens with a guitar melody and electronic manipulation, then jazz-tinged drums come up from the background, slowly pacing the rhythm. Reverberating vibraphones play with the musical texture and a scent of glitch minimalism brings the song to an end. Magnificent.

“The Wild Palms” is another standout track: compositionally perfect, it has percussive spice and a minimal-ambient background texture. “Gone Gone” is a melancholic drone song that closes the album, reminding me of Bohren & der Club of Gore. Here cymbals, dusty keyboards, vibraphones, and electronics are all chasing one another, then they’re hiding until all come together in force for the finale’s crescendo. Processing, granular synthesis, and other digital effects, as part of the post-production process, finally polish the tracks and serve them to our ears. And, believe me, it’s pure joy.