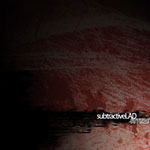 SubtractiveLAD (née Stephen Hummel) is a Vancouver-based musician with a background in jazz. He now creates his own computer instruments. Suture, his second album (to be released on Valentine’s Day), begins with a wash of palette-cleansing noise on “Petals.” But “Brokadocious” is where it starts to get funky. Intricately programmed drums and synths stutter their way through a frenzied jam session.

Most of these tracks employ a similar structure, with instruments slowly appearing. The album as a whole builds to a noisy climax, then ends with subdued ambience. There are some really beautiful sounds here. Each idea is fully explored. Each track is its own world.