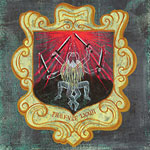 Prolific Prefuse 73’s latest mini-album sees him veering even further from hip-hop influences. On “The Dirt and Two Texts (Afternoon Version)” he applies his signature hot-levels distortion to a laid-back synthesizer melody. Four Tet guests on “Creating Cyclical Headaches,” which features piercing tones and atonal bleeps over a sweet beat. “No Origin” is reminiscent of old-school Prefuse with horn snippets and bursts of samples. Likewise, “One Star and Three Stripes” seems like a remix of older material. Most of these tracks are interspersed with wacky samples. “Matrimonioids…” has the sweetest melody of the bunch.

There’s some good stuff here, though a few of the melodies are nondescript. Prefuse claims this music was an outlet for the stress of touring. His last album was overrun with guest stars, so I’m actually happy he’s returned to more experimental material, even if not all of his experiments succeed.