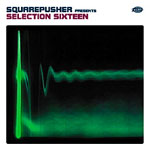 Again? Tom Jenkinson reaffirms his status as the most prolific artist in the IDM world with another LP—but he’s returned to his original medium, the breakbeat, for the first time in… ooh, a year? As usual, it’s a mixture—a third big, funky mutant jungle, a third freestyle electro-acoustic jam, a third weird experimentation. “Square Rave” and “Dedicated Loop” stand out as fine examples of drum & acid & odd noise, perversely danceable and atmospheric, while elsewhere he tries to blow your tweeters with the fantastic blast of hyper-effected noises that is “Time Borb” (not a misprint), jerks through a funky round of off-kilter 909 (“Schizm Track #1”), and even chucks in a slice of pounding hard techno (“Snake Pass”). But that’s about it. Most of the other tracks are either datedly uninteresting (“Mind Rubbers”), short and pointless (“Yo”), or plain hideous (“8 Bit”). As talented as Tom can be, he’s irritatingly inconsistent. Damn. Still better than the atrocious Maximum Priest EP, though.