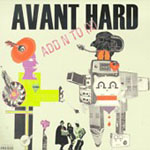 One-word review: Ouch! Add N to (x) are nothing if not uncompromising. Their remit is hard to pin down, but it’s probably best to describe it as synth-punk. Tracks like “Fyuz” and “Buckminster Fuller” hammer through their four minutes with more raw noise and energy than you’d expect from mere oscillators, with repetetive, distorted loops blaring over rock drums and screeching effects. “Ann’s Eveready Equestrian” reveals a more restrained side, sounding somewhat like Gary Numan’s Tubeway Army, until the most ear-destroying sound effect ever known shreds your speakers. Other tracks continue the abrasive theme, with the odd ray of light in the fuzzy darkness: the jaunty “Skills” hops through an almost Charleston pizzicato pattern, then suddenly turns cool with a raw electro squeal. There’s the odd downturn—the endurance test repetition of “Oh Yeah Oh No,” the silly opener “Barry 7’s Contraption”—but the other tracks are well worth hearing for their unmistakeable retro-futuristic sound. A word of warning (other than “Ouch!”)—don’t listen to it all the way through. It’s just a little too sand-paperish to the ears to listen to in one shot. In two or three, it’s great.