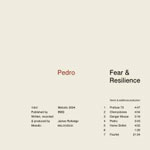 This EP of remixes of a track by James Rutledge features some heavyweight producers. Prefuse 73 kicks it off with an invigorating, stuttering four minutes of horn and guitar samples over a basic beat. Near the end, these samples gel into a melodic passage while background sounds pan between channels. British producer Cherrystones offers a much different interpretation with fuzzy, dramatic crescendos and a Morse Code-like break-down. His mix sounds like the theme song to a ’60s British spy show. Next up is Danger Mouse of Grey Album fame, who focuses on vocals and flute over a jazzy big beat. Unfortunately it’s too short to really take off.

Pedro’s own mix has horns aplenty, bouncing beats, and playful sound manipulation, while Home Skillet’s take is a busy collage of abstract noises which cleanse the aural palette. A bonus track with funky bassline and live-sounding drums teases at a mere 1:22. Fourtet makes up for this slight with over 21-minutes of tortured drones and barely recognizable guitar. Jumbled horns and percussion appear loudly in the middle, but for most of the track heavily processed bits of sound swirl in a contemplative, intricate mix. This is one of the few remix EPs I can listen to straight-through. Each mix is distinct enough that the tracks don’t sound repetitive. And all of the mixes stand on their own as new ideas and enjoyable music.