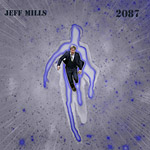 Jeff Mills’ latest album this especially productive year is inspired by the obscure 1966 sci-fi flick Cyborg 2087. The plot is suspiciously similar to Terminator—a cyborg travels from the future to the present to assassinate a mathematician whose discoveries will enable a dystopian society repressed via mind control.

Despite Mills’ statement of intent, the music is similar to his other recent work. His distinctive palette of pure, analogue tones is always pleasant to hear, though it sometimes seems lacking in range.

“The Secret” is an ominous, drawn-out crescendo of skittery synthesizer chords. At first I thought “Human Condensing” was going to play around with phasing a la Steve Reich, but after a few tantalizing variations it falls into a simple loop for its final minute. “Programmed to Kill” makes use of primitive computer sounds. With its heavy Purpose Maker kick drum, it could even work on a dancefloor.

My favorite tracks are the most melodic. “Free Thinkers (The Dream),” for example, is beat-less and beautiful. On other tracks, only certain parts stand out. “Search for Sigmund Marx” is enjoyable for its bassline alone. The synth line on “Tracer 1” is instantly catchy, but by the time beats break apart at the end it has outlived its welcome.

By the album’s midpoint, the tracks tend to blend together. “Homing Device” uses such familiar Mills sounds, it falls into the background. With concentration, the percussion on “Operation to Free Garth” is quite distinctive, but the loop over top is a descent into madness. “Running Through Time” has hypnotic reverberation, but the overall effect is surprisingly emotionless for such an evocative title. “Dreams of Dreams,” on the other hand, perfectly captures the sensation of being half awake, and its sound is Detroit through and through. The bells on “Consequences” are perfectly shaped as only Mills can do.

Mills evidently approached this project with complete seriousness, but I think the album would benefit from a touch of camp. It’s hard to look back at sixties space fashion without cracking a smile. That said, Mills successfully builds a fantasy world with few Earthly ties. Next month he tackles Fantastic Voyage.