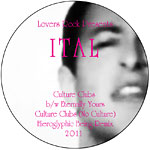 I heard echoes of Hieroglyphic Being on Ital’s 100% Silk EP, so it’s no surprise Ital enlisted him as remixer for his second single. The A-side begins with crisp percussion and big electro bass, soon joined by a melody woozy with wow and flutter. At several points synthesizer breaks into song despite the warpage, reminding me of early Boards of Canada.

On the B-side, “Eternally Yours” features embarrassing B-boy grunts over broken beats. None of the synth sounds seem especially new, nor do they really gel with the vocals, but the combination is certainly unique. The Hieroglyphic Being “No Culture” mix is predictably odd, with dense, muddy layers of sped-up tape. Everything slows mid-way through yet there’s a distinct lack of bass. The keyboard bits at the end strike me as more messy than jazzy. While I expected no less of a departure from Moss, I wish he had stayed truer to the original material. The A-side is definitely the gem here.