Hieroglyphic Being: The Urantia Project 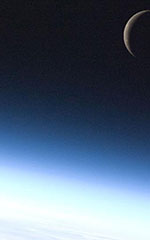 Appropriately, Further continues its series of limited cassette-only releases with a demo Moss recorded to 60-minute tape in 1996. At the time, several big-name Detroit labels passed on the material, but it deserves to see the light of day.

“Adjuster” resembles a sci-fi video game soundtrack. Snares slap and alarms cry. Muffled bass is like a starship engine. “Stylometry” and “Daimonion” are a free jazz jumble of echoey beats and jittery synths. I don’t know how Moss was able to pull these elements together into such a fascinating whole, but the effect is truly mesmerizing.

The percussion on “Fedistic” keeps changing. Lo-fi blasts of bass give way to cowbell while piano and flute sounds ramble disjointedly. There’s even tape decay (from the master) at one point.

The B-side begins with “Havona.” It is most similar to Moss’s recent projects, with dense, distorted snares and the rounded synth sound he loves. A bouncey organ melody and brittle snares form “Irreverible.” “Life Carriers” will make you think your tape is warped. The beat is steady, but treble electronics strain to be heard. On “T.U.P.” glassy tones burble to booming drums.

Despite their heavy 4/4 beats, these are far from club tracks. They show that even in his formative years, Moss’s background as a scholar, a dancer, and a DJ combined to shape a unique perspective. Moss brings house and industrial music to jazz. Even fifteen years ago, he sounded like no one else.