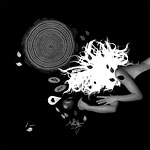 Demdike Stare’s Symbiosis snuck by me when it was first released, but last year I kept coming back to it. I’ve always been a fan of Miles Whittaker’s work as one half of Pendle Coven and of his solo work as MLZ.

In 2010, Whittaker and Sean Canty released three vinyl albums as Demdike Stare, each with an elegant black and white sleeve. Now they’ve collected them all in a deluxe triple-CD set, adding forty minutes of previously unreleased material. 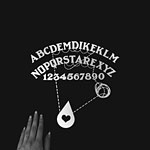 The first disc is dominated by “Dusk,” a sprawling fourteen-minute piece that resembles a live performance as it moves from ambience to techno and back. There seem to be two movements. In the first, decaying layers of sound drone over slow bass rumbles. Metallic, reverberating noises enter the mix. Exactly halfway through, everything drops out but for the bass and an eerie wind. An apparently borrowed piano phrase evokes a film soundtrack. The second movement is driven by a forceful techno beat. It’s accompanied by sustained minor chords for a kinetic climax. The end, like the beginning, is a waterfall of piano notes.

“Forest of Evil (Dawn)” begins with a brief loop of saxophone and piano, but they stop to creaks and pounding. It’s like a jazz club under zombie attack. As more percussion joins in, the beat gains an industrial feel. Two-thirds of the way through, it abruptly switches gear with a cinematic sequence. A long, low rumble of bass adds to the sense of unease. A bonus track, “Quiet Sky,” uses a similarly deep, organ bass note. A bell-like three-note phrase and something like a voice form a curious incantation. 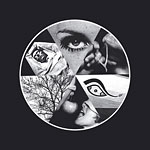 At the beginning of “Caged in Stammheim,” bounces turn to drips. The bass-heavy rhythm has shades of dubstep, but it’s joined by horror movie choral fragments. “Eurydice” is dominated by low notes and a pulse of heavy machinery. Noises build until they are overwhelming, then drop out dramatically, revealing whispered voices. “Regolith” pounds away while ball bearings clack. “The Stars Are Moving” is dubby, electronic, and intense. They’re moving because the floor is shifting.

“Bardo Thodol” starts with chanting, presumably by a Tibetan monk. Beats and bass bulk up the track, nearly hiding his voice. This is one instance where Demdike Stare’s treatment of source material seems incongruous.

“Matilda’s Dream” begins with a gentle breath of cascading reverberations. Slowly a desert wind builds and subsides. At over eleven minutes, it’s a spiritual experience.

Disc two has three bonus tracks, each in a completely different style. “Nothing but the Night 2” is five minutes of bass-heavy dub. An analogue synthesizer punches through, each note quickly fading. “Library of Solomon Book 1” is downright frightening. Menacing bursts of electricity sound over what could be an extremely slowed-down siren. A child-like voice becomes trapped. Finally, “Library of Solomon Book 2” is slow-moving dub-techno a la Wolfgang Voigt as Gas. Picture an icy creek through a branch-choked forest. At the end it suddenly cuts to a guitar piece. Is that the true source of the beat? 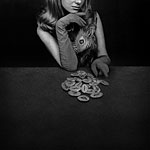 “Repository of Light” takes its time. For eleven minutes, a single chord shimmers over a slow beat. Just past the halfway mark, warm synthesizers dance like sunlight through leaves. Of course Demdike Stare break the calm with a shrill shriek on “Of Decay & Shadows.”

“Viento de Levante,” named for a wind in the Strait of Gibraltar, features strummed strings, then speedy drumming. I wish I knew the context of the source material. On “Leptonic Matter,” distortion rises from murky depths. “A Tale of Sand” is machine-like pulses punctuated by piano stabs. Gradually, a surprisingly musical bass chord progression fades in.

Bonus track “Filtered through Prejudice” is a series of reedy tones. I imagine wind whistling through an art installation in an open field. There is something, dare I say, New Age about it, though a beat emerges with two minutes to spare. “Past Is Past” is meditatively repetitive. Male voices chant, a record crackles, and gongs sound. I want to be optimistic, to believe that this repurposing retains something of the chanters’ original intent.

Demdike Stare’s recordings have incredible dynamic range. You have to play them loud to do them justice. Whittaker and Canty contrast periods of discomfort with moments of beauty, building pieces from hundreds of tiny details. The track titles evoke exotic locales and mysterious imagery, injecting a welcome theatrical aspect to electronic music. I don’t think the result is unique enough to spawn a new genre, but it is a wonderful hybrid of existing styles. Listen in the dark, and prepare to be enveloped.