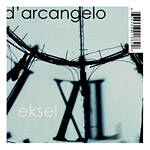 The album begins with a chopped hip-hop beat clunking along an ambient drone and some distant chords. This essentially goes on for 4 minutes—welcome to 1999. D’arcangelo have been mainstays in the realm of experimental electronic music ever since their first release on Rephlex back in 1996. Combining elements of electro hooks and ambient atmospheres into their experimental music, I have always anticipated their next release with excitement.

Unfortunately it seems the brothers Fabrizio and Marco are satisfied with rehashing the “IDM” sound of the late 90’s and the early 2000’s. Every track on this disc sounds dated, as if it was constructed back then and simply dusted off for release now. The production skill is certainly evident; they still “got it” so to speak. That isn’t the problem for me. My problem is the fact that every sound, every structure sounds exhausted. The album does pick up in the middle, but I still had to force myself to finish it more than once, because it was just not interesting at all.

I can’t even suggest a highlight among the Eksel track listing. If feels like music by numbers; there are no real distinctions between the tracks, no personality. It’s safe to say I was disappointed. If albums like this are the last ditch efforts to continue the IDM genre, I say something needs to give it the final, fatal blow.