Bullwackies All Stars: Free for All 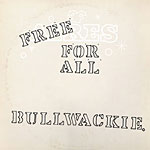 Fans of heavy, smokey, seventies dub will appreciate this latest Wackie’s reissue. These riddims made by Melvin “Munchie” Jackson and Lloyd “Bullwackie” Barnes were used by The Heptones, Little Roy, and Stranger Cole, among others. The title track, featuring “Family Man” Barrett on keyboards, sounds like the soundtrack to a gritty urban flick. “Space Age” is another highlight, with evocative, trippy guitar. On “Tribal Dub,” muted horns stab while Roy’s voice is pushed to the background. The bassline is magnificent. “Boma-Ye-Dub” features catchy, brassy horns with a very sixties feel. “Meditation Dub,” an apparent Charlie Ace deejay track, has bass that sounds like it’s coming from a deep well. “Blackbyrd” is similarly resonant and beautiful. These are all short, 7-inch instrumentals, but you can’t get much deeper than this solid, classic set.