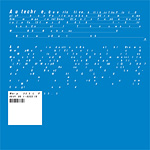 Autechre’s first album in nearly three years will probably take nearly that long to sink in, but my first impression is pure pleasure. The opening track, “Altibzz,” teases with warm synths seemingly played live. I liken it to the first sip of hot tea—very satisfying. “The Plc” is electro on speed. Each note is quirky in some way. About two-thirds of the way through it breaks down into digitized laughter, then snippets of a familiar hip-hop sample. “IO” crunches what sounds like a news reporter through robotic processing.

A few of the tracks seem more experimental than musical. At first, “Simmm” reminds me of a gamelan. The sounds ride a razor’s edge between pluck and percussion. Then more and more of them build, almost randomly until the inevitable break-down, in this case chunks of panning bass. The notes on “paralel Suns” sink as reverb increases, dragging the hapless listener into whale-song depths. Listening to “Fol3,” I imagine a video game where players throw huge, crumbling, blocks of pixels at each other.

Other cuts remind me of an earlier era. On “rale,” electronics groan like branches rubbing together over a boom-chick beat. I know I’ve heard those chords before. On “90101-5l-l,” Autechre construct a glitchy groover from squelches and phasers. “Theswere” is wonderfully melodic but painfully brief, while “chenc9” evokes the style of LP 5. “Notwo” is lovely deep ambience. “Outh9X” builds slowly and beat-lessly with fascinating bass.

Even after nine albums and an equal number of EPs, Autechre’s Brown and Booth are full of fresh ideas. It feels like the varied electronic sounds here grew into place just so. Each part is perfectly placed, like a flower arrangement that would be ruined with even the slightest change.