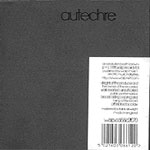 The music on this album is incredibly beautiful. I’ve heard many people describe it as “organic” since the sounds, though definitely mechanical, seem natural thanks to innovative sequencing that dispenses with recognizable time signatures. My favorite tracks are the melodic “Vose In” and the dark “Under BOAC.” On the latter, distorted voices form an undercurrent behind clattering beats and a pleasing melody. The album works well on a whole, with expertly juxtaposed tracks and lots of noises in between them. Chalk it up as another masterpiece from Sean and Rob.

(For superior cover art, North Americans will want to track down the UK version of this release.)