A Brief History of Techno

Any given moment, countless people are listening to electronic music. It’s hard to believe that at its start, techno was considered an underground movement. 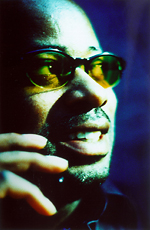 In the early eighties, a trio of pioneers in Detroit merged the sounds of synthpop and Italo-disco with funk. High school friends Juan Atkins, Derrick May, and Kevin Saunderson danced and spun at parties where the music ranged from Kraftwerk to Parliament. They listened as influential radio DJ The Electrifying Mojo played European imports alongside Prince and the B-52’s. In 1981 Atkins and Richard Davies, aka 3070, began releasing records as Cybotron. Techno was born.

Around the same time, the infant hip-hop community picked up elements of Kraftwerk’s music, thanks to DJs like Afrika Bambaataa and Grandmaster Flash, and created electro. Electro relied heavily on synthesized beats and computery vocoder voices. In 1982, Afrika Bambaataa took the melody from Kraftwerk’s “Trans-Europe Express,” combined it with the distinctive beat from Kraftwerk’s “Numbers,” and composed the anthem “Planet Rock.” Electro spawned the idea of the funky computer. MCs rapped over its beats, and breakdancers formed a new culture in the cities where electro reigned.

In Chicago and New York, house music took a similar path. Larry Levan, Frankie Knuckles, Ron Hardy, and other DJs spun synthesizer-driven dance music, creating their own edits and mixes. Before long, Chicago radio caught on with the Hot Mix 5 on WBMX, and locals began creating their own tracks to play.

In the late eighties and early nineties, something odd happened. Techno and house, which had failed to gain mainstream success in the United States, became a huge phenomenon in Europe—especially in Great Britain. In fact, the term techno was popularized by Virgin Records’ seminal UK compilation Techno! The New Dance Sound Of Detroit.

Around 1990 raves began to appear near London. Most organizers of these large, illegal parties made money dodging British licensing laws. Sometimes the location was a secret until the night of the event, and elaborate phone trees and rendezvous points were employed. Hundreds of ravers would descend simultaneously, making the parties more difficult to break up.

For a brief time in the U.K., rave music went pop. In 1996, The Prodigy hit Number 1 on the pop charts with two different singles, so for a while the record industry tried to push electronic music. At the same time, Warp Records built a roster of musicians who preferred to explore more experimental fare. Autechre (Sean Booth and Rob Brown), Aphex Twin (Richard D. James), and Squarepusher (Tom Jenkinson), created alien atmospheres which pushed the boundaries of musical conventions. They were partially inspired by a second wave of Detroit artists, including Carl Craig, Jeff Mills, and Underground Resistance.

Techno is a soundtrack for the wired world. While its original creators were on the cutting edge of technology, many of its current listeners grew up with computers. Techno reminds us that humans control the machines, and electronics can be used to express funk and soul.