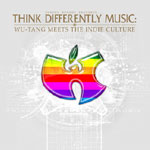 Aesop Rock and Del Tha Funkee Homosapien get perfect production on “Preservation,” but C.C.F. Division fail to live up to the beat on “Cars on the Interstate.” Only a couple of tracks seem truly weak. “Biochemical Equation” features rhymes by RZA and MF Doom, who should both stick to making beats. Del Tha Funkee Homosapien is really out-there on “Fragments,” and while his lyrics are amusing, the track seems out of place.

This is a dream-team compilation with some unlikely pairings. As a bonus, lengthy liner notes describe how each track came about (often from audio files exchanged online). With so many weak rhymes getting airplay, a project like this brings back good old days before rap became pop.