When I first heard that Sónar was coming to Chicago, I wasn’t sure what to expect. I didn’t realize Sónar Barcelona featured new talent and experimental music by day to accompany the more widely publicized big-name techno acts at night.

In the spirit of discovering more obscure artists, I decided to focus on the afternoon and early evening shows rather than the SmartBar after-parties. I did check out Jimmy Edgar and The Slew featuring Kid Koala at Millennium Park Thursday. They were what I expected, loud and boisterous! In fact, their music seemed out of place at the operatically architected Jay Pritzker Pavilion on a cool, fall-like evening. Picnicking families, tourists, and professionals just off work didn’t know what to make of Edgar’s highly compressed West Coast eighties electro. The incredible volume drove me and my friends to the very back, near Lurie Garden.

Eventually, someone took Edgar down a notch and he played a more IDM-inspired piece. Then Kid Koala and company displayed excellent showmanship. I wasn’t that into their bluesy grooves, but it’s hard not to smile at turntable tricks. 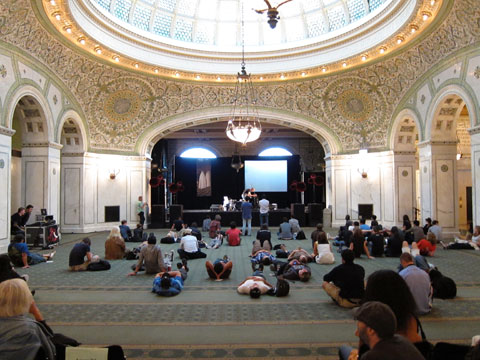 Friday, I took the afternoon off work to make day two at the beautiful Chicago Cultural Center (Chicago’s old library). Catalan musician Faraón’s set seemed plagued by technical issues—he kept looking to the sound engineer. He would kick off a simple synth loop, then play along with his drum kit, gesturing elaborately with the sticks. I wish his arrangements were more complex.

I headed into the Claudia Cassidy Theater at 4 for Bradien, who also played the day before. Their music is exotica instrumental pop with novelty percussion. One member played melodica while others sometimes picked up guitars, accompanying a recorded rhythm and bass track. Projected behind them was Super 8 footage of planes, beaches, and dancers. It was a strange window into what must be a Euro hipster scene. 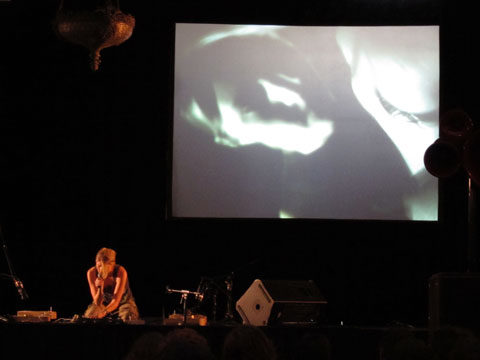 Lesley Flanigan’s music was more to my liking, at least until the last piece when she incorporated simple lyrics (“Thinking Real Hard”). She crawled around hand-made wooden speakers, waving a microphone to pick up feedback from her own delayed vocals and hand movements. She also positioned a tiny video camera which showed slowed footage of her motions. I imagine it took a great deal of trial and error to get such musical sounds. Her performance actually echoed Rhys Chatham Trio’s experiments with delay at Adventures in Modern Music Wednesday night. 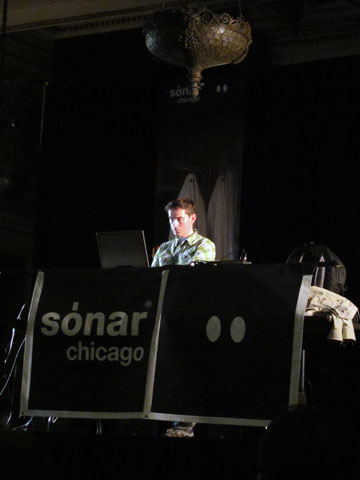 The highpoint of Friday night was Oval’s laptop set. In the tradition of most German musicians I’ve seen, Markus Popp was stoic and shy. He played rumbling, abstract IDM. Some of the compositions were quite short, but he didn’t leave time for applause. Preston Bradley Hall, with its beautiful restored Tiffany glass dome, was packed. Listeners were more attentive up front where seating was on the floor, and the sound was better there too. I just wish Oval had played more than an hour. Just as I was starting to lose myself in his enveloping, atmospheric soundscapes, Popp abruptly waved goodbye and hurried off stage. 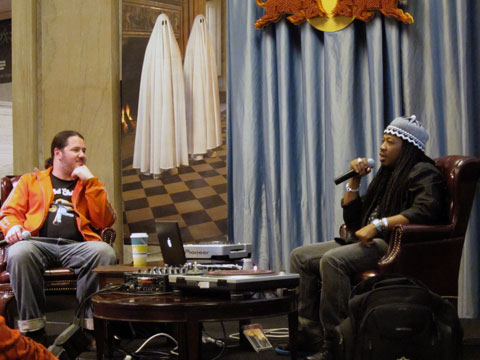 Day three I was less ambitious. I started out with Ron Trent’s Red Bull Academy interview. Trent told the usual story of discovering records and getting his first turntable, but he also hinted at Chicago DJs’ unease with the European dance scene they inspired. He acknowledged that raves benefitted him financially, but insisted they were not in the same spirit as early house parties, where the focus was more on finding a unique break than on popping pills and waving glow sticks. In the U.S. I think it’s more a city/suburb disconnect than a generational one. Trent, when talking about his collaborations with Chez Damier, also recounted how Derrick, Kevin, and Juan used to visit Chicago parties, then return to Detroit to put their own spin on the music. Trent gave a shout-out to Warehouse and Music Box owner Robert Williams, who was in the audience.

Next, I headed upstairs and grabbed one of the last seats for Ben Frost. While his volume level was impressive (with many in the audience covering their ears), I didn’t find much unique about his drones or recorded grunting. Frost wore skinny jeans and occasionally strummed an electric guitar while facing huge stacks of speakers. Most of the audience, while deafened, seemed to enjoy the spectacle more than I. 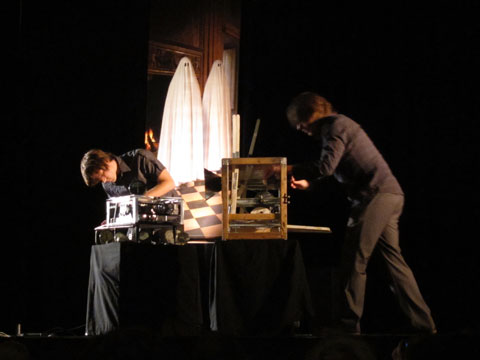 Finally, Nicolas Bernier and Martin Messier performed “La Chambre des Machines.” Call me a cynic, but it seemed more magic show than musical performance. The men moved around two large noise-makers while their laptop played a backing track. One machine clanked while the other creaked. I cut out early to head up to The Empty Bottle (for more Adventures in Modern Music), pondering the disjointed variety of acts, but appreciative I had the chance to see them all in a beautiful setting, for free.