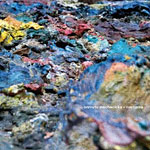 Onmutu Mechanicks is Arne Weinberg, who has been creating Detroit- and dub-inspired techno for ten years on quality labels such as Down Low Music, Styrax Records, Matrix Records, Frantic Flowers, Dpress Industries, and his own AW-Recordings. Onmutu Mechanicks supposedly represents Weinberg at his most abstract. This is his second full-length release under the alias, after a CD-R earlier this year on Diametric.

We begin in dubby territory as “Catatonic” fades in with reverberating chords and a heartbeat. Bass notes wander moodily, adding a deep, late-night feeling. “Aspiring to Aspire” also makes use of an unusual rhythm, with silence on the fourth beat. Low notes bend, and metallic tones vibrate. Despite the tempo, this track has an ambient feel.

Weinberg loses steam after the first couple of tracks. “Lupus Moon” is probably the most generic dub techno cut on here. For ten minutes, it burbles along with muffled kicks and echoing chords. “Neutrino” has a clearer, bigger kick drum. Compressed chords dissolve in the background. It all feels a bit muddy, though. “Constant X” is equally dense and claustrophobic, making it difficult to focus on any individual elements.

Things look up again with “When You Return.” A fast beat and catchy synth line drive straight-ahead techno. UFO-related air traffic control chatter halfway through adds an element of mystery. “Across the Styx” finally takes us into experimental territory. It is beatless, with reverberating synthesizer notes, slow arpeggios, and bass pulses.

The album ends with two tracks from Echocord Colour 06. “Your Touch Is So Electric” stands out thanks to a woman reading rhyming verse. While it risks feeling over-dramatic, it’s a fun new spin on deep techno. “On Silent Wings” is hard not to love. The bass is low and tasty, and, while the dubby clatterings and chord play are nothing new, they’ve been crafted to Chain Reaction specifications.

I have mixed feelings about this album. It’s a decent late-night listen, but in the month or so I’ve owned it, it hasn’t grown on me. Weinberg is certainly an adept producer, and he knows what he likes. I just wish his experiments were wilder. Too many of these tracks incorporate over-used sounds. There’s nothing wrong with playing to your audience, but dub techno needs to escape mid-nineties clichés if it is to have any staying power.