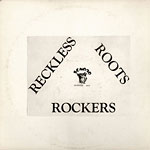 Jah Upton, Lloyd Barnes, and Prince Douglas mixed this Bullwackies dub collection in 1977. The riddims were recorded a few years earlier with the Soul Syndicate band in King Tubby’s Kingston studio. While the production isn’t especially out there, the bass is solid, the versions catchy. “Dub Full of Girls” is happy-go-lucky with a reedy organ chorus. “Under World” is deeper. It has a great bass solo two-thirds of the way through. “Explosure,” credited to Sylvesters, rolls along. The middle builds with a strange feedback drone. “Chin Chow” features some of those reverbed smacks I associate with Tubby’s dubs. “Soul Syndicate” is my favorite riddim, and it’s a familiar one. The sweet spot (again arriving two-thirds of the way through) is dramatic equalization which pushes all of the bass away. Some stereo panning kicks in at the end for good measure. Jah Carlos’ “Prepare Jah Man” is another fine track, with Carlos’ sweet vocals masked by slight distortion. Fans of straight-up seventies dub should definitely snatch this up.