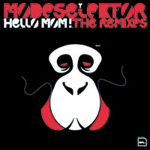 This superb 12-inch features an epic ten-minute techno mix on one side, and dub and grime on the flip. First up is a brutal Sleeparchive remix of “Dancing Box.” Static bursts and a fast, throbbing beat provide an aural work-out. There’s a break half-way through that sounds like someone knocking on a door. The second half is busier than most Sleeparchive cuts, with rapidly changing beats, laser blasts, and cries of squelch. I could see it packing a dance floor.

The B-side remixers take on downtempo tracks. On the Siriusmo mix of “Silikon,” funky bass and a choppy grime rap combine for a catchy jam. The Dabrye mix of “Fake Emotion” is an electronic dub. Paul St. Hilaire’s reverbed vocals caress a deep sine-wave bassline. Finally, there’s a “Grime Remix” of “Silikon” by a secret producer. It’s short, sweet, and potentially headache-inducing.

This is a release that should appeal to the electronic music masses. My favorite mixes are the Sleeparchive and Siriusmo ones, but there really is something for everyone.