Mike Huckaby: My Life With The Wave 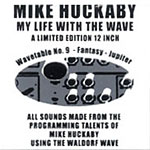 Mike Huckaby reinforces the connection between intelligent Detroit techno and deep dub techno on a 12-inch so good it hurts. On “Wavetable No. 9” Waldorf Wave synthesizer notes are pushed to oozing decay under a cascade of Basic Channel metallic echo. The beat remains crisp while layer upon layer builds. It takes a couple of minutes until the bass joins, growling with menace. The flip side is melodic, almost jazzy. On “Fantasy” synthesizer notes lounge among congos and hi-hats. “Jupiter” features gentle bass and rounded, glassy bells caressing a relaxed chord progression. It truly doesn’t get any better than this.