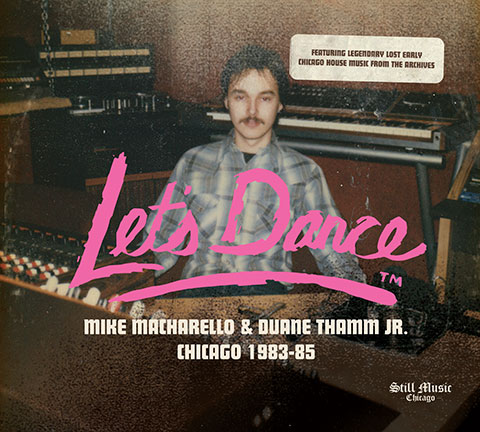 Few people are aware that one of the first Chicago house music labels was started by Mike Macharello, a white, gay DJ from the far west suburbs. Macharello, inspired by radio rock DJ Captain Whammo, began his DJ career at Hollywood Disco in Hanover Park. Soon he joined several record pools (organizations that distributed music to DJs), including Dogs of War, where he became a director. When that pool folded, Macharello founded Let’s Dance in 1981. That same year he became a hot mixer on WBMX and WXFM before moving to WGCI, where he created his own remixes. After collaborating with friend and fellow DJ Duane Thamm on an unofficial remix of “Planet Rock,” Macharello decided to start his own label, releasing ground-breaking EPs like the Italo-inspired “Single Girl” and Thamm’s tempo-changing tool “Jump Trax.”

Let’s Dance Records: Mike Macharello & Duane Thamm Jr., Chicago 1983-85 on Jerome Derradji’s Still Music is a 4 LP or single CD collection of the label’s greatest hits with liner notes by Jacob Arnold and artwork by Al Kent. Ask your local shop to carry it or order it direct from the label.