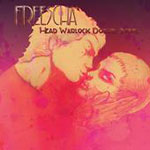 Fans of cassette tape distortion will love Freescha’s new album. The songs sound even fuzzier than those on What’s Come Inside of You from 2003. I can’t believe it’s been so long since their last full-length!

After an intro full of drop-outs, “Old Age for Duke of Slade” builds to a fantastic melodic peak. “Galacticus” introduces the first heavy beat, with backing vocals forming the ghost of a pop song. “Moving” has a great break near the end with staticky beats and light electronics. A handful of tracks experiment with speed (and pitch) changes. “Killer on the Ride” has some wild distorted voices at the beginning which promptly disappear. “Humping for Dummies” has a nice bassline and some vocoder.

Unfortunately, all twenty-four tracks are quite short, and none of them have the same melodic punch as the hits from Freescha’s last LP. Just as the songs start to get going, they’re cut off. This is an enjoyable series of sound experiments. I just wish Freescha had fleshed out the tracks to a couple of discs.