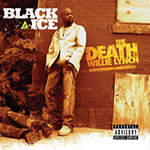 Black Ice is a skilled lyricist, though his serious subject matter sometimes makes for a heavy listen. His themes are often personal. On the jazzy ballad “Lone Soldier,” he raps about his daughter and the parallels to his own childhood. The chorus, “Daddy do you love me?” tugs at the heartstrings, but manages to avoid cliché. Likewise, on “The Real” Black Ice composes a sweet ode to his parents.

“The Ugly Show” falls prey to a chipmunky chorus, but the verses are a powerful commentary on the (lack of) federal response to Hurricane Katrina. Black Ice exclaims, “For God’s sake, niggas, they left us for dead!” He praises Kanye and disses Halliburton. His most powerful lines escalate into anger and frustration:

This is your nation’s poor
but you still turn around and ask us for our kids for war.
And them battalions from the bayou
that don’t know what they over there fighting for,
what the fuck do you,
how could you say to them
when they learn that their parents died
casualties of the war on poverty
waiting for help outside a fucking stadium!

“TakeYaTime” featuring Musiq is another powerful track, preaching to women. (“The world is yours.”) Black Ice discusses the difference in mental maturity between a boy and a man. The production on “Nice2MeetU” is superb with smooth electronics. “Hoodwatch!!” is meant to be a club cross-over. The beat is decent, but the hook is annoying. There are a couple of other poppy tracks that don’t really fit in, but luckily they’re easy to ignore.

The entire album benefits from Eric “Booty” Greene’s smooth production. (DJ Jazzy Jeff executive produces.) But above all, it’s the lyrics here that really shine. Black Ice is a poet, and his style sometimes sounds more coffee house than concert hall. That’s a plus in my book.