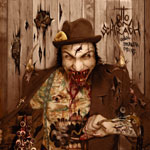 In which Otto von Schirach goes grindcore and almost literally flattens his sound.

This time around Otto’s mental movements are conveyed by spooky nursery-rhymish vocals, grindcore guttural utterances and pseudo-goth atmospherics. Not a bad approach, but the whole thing lacks flesh, so to speak. This is just a skeleton—scary as it might be—a full-fleshed skinless body dripping blood and showing some musculature is far more terrifying.

“La Sangre del Dedo Intelecto,” “Goat Sperm” or “The Kotex Necro” are good chewy rotting pieces of meat, though: proof enough that Otto von Schirach can really scare/squeeze the shit out of your ears.

P.S.: As with Chopped Zombie Fungus, the artwork is top-notch and by Arnold of infinitransformation.com.