An Interview with Robert Henke 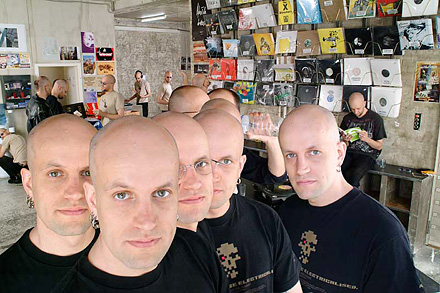 Robert Henke and Gerhard Behles formed Monolake in 1995 and released several 12″s on the famous Chain Reaction label. According to their Web site, “the musical development of Monolake now is mostly driven by Robert Henke,” while Behles has started a software company, Ableton. Monolake’s sixth album, Momentum, is about to be released on Henke’s label, Monolake/Imbalance (ml/i).

Jacob: Tell me about yourself. Were you born in Berlin?
Robert: No, I was born in Munich and I did move to Berlin after finishing school.

I read you studied sound engineering for film. What are your favorite films?
A huge range. Including 2001, Stalker, Blade Runner, Insomnia, Being John Malkovich, and lots more. I like the artform “film” in general.

How long have you known Mark Ernestus and Moritz von Oswald? Have you worked closely with them?
I’ve known them since 1993. I did work at their mastering studio (Dubplates & Mastering).

What are some of your early influences?
Eno, Frankie Goes to Hollywood, Tangerine Dream, Depeche Mode, Yello, Art of Noise—basically every kind of more mainstream electronic music which was known at the time. Interestingly enough I did not like Kraftwerk so much as a teenager.

What musicians do you listen to today? Do you buy a lot of records?
I try to get hold of all the electronic music I can get, just to have an overview, and I also listen to 20th-century stuff like Steve Reich, Morton Feldmann, etc. I recently enjoyed “Elektrokardiogramm” from the new Kraftwerk album, Go Plastic (Squarepusher), Advance (LFO).

How much does Gerhard Behles contribute to Monolake these days?
Zero. He is way too busy with Ableton.

How long does it usually take you to complete a track?
Long. I am thinking way too much. Approximately 3 weeks.

What percentage of the time you spend on a track is spent writing software?
50% or more. But I want to reduce this to 5% in the future. The more I work for Ableton the less I want to be bothered with code when making music. And Live does most of the things I programmed for myself in the earlier days.

What kind of work do you do for Ableton?
I am part of the conceptual team. We decide what should be in Live and how exactly it should work. Starting from global things (like do we MIDI or not?) down to details of each functionality. And I am the one who’s creating the effects in Live. They are my special babies 🙂

What are your interests besides music?
Software. My girlfriend. Politics. Art. Nature. Other girls. I am not sure about the order 😉

Besides touring, do you currently have any projects underway?
Yes. I plan to do a kind of live performance/remixing album of all my more dancefloor tracks. And I am doing some installation things again. In Montreal in the Museum of Modern Art there will be an installation for 64 lightbulbs and I will write a composition for this.