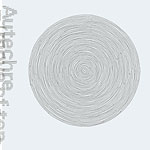 If Oversteps is Autechre’s response to recent outside influences, Move of Ten sees them turning decidedly inward. These ten tracks are flat and claustrophobic. Via MP3 or over earbuds, the recording actually sounds cruddy, but on a good system, I’m able to discern at least a hint of depth.

On “etchogon-S” the beat pounds like a low-rider with rattling windows. Clusters of piano notes do little to lighten the mood. “y7” is a wonky acid track with panning vibrations. “pce freeze 2.8i” features massive electro beats. Shimmering treble, blocky mid-range, and a lower octave response all take turns speaking.

“rew(1)” reminds me of LP5-era Autechre. The beat is constantly changing, and the chords are dense. I picture a lumbering, face-less robot. “nth Dafuseder.b” is an odd concoction, with flute drowning in a murky sea of echo while crisp beats tap alongside.

“iris was a pupil” has some of the loveliest sounds on the album. The delicate melody is almost classical. “no border” also reaches back to earlier Autechre sounds. Notes stretch like after-images on a screen. By contrast, “M62” is compressed and oppressive, with all of its components smooshed into a dull midrange. I’m reminded of AFX’s Analord, where a computer program could be hiding in the vinyl grooves.

“ylm0” is lighter and more intricate. The choice of keys evokes Middle Eastern music. Finally, “Cep puiqMX” is a video game of blasts swallowing warped orchestral chords. It’s a tense juxtaposition, unlike anything I’ve ever heard before.

At first I thought Autechre (and Warp) were generous to release two albums this year, but these make for a perfect pair. Oversteps looks forward, while Move of Ten looks back. Once I got past the odd mastering of the latter, I’m no longer sure which vision I prefer.