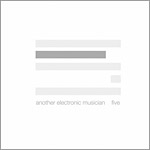 None of Another Electronic Musician’s previous albums have struck a chord with me, but Five adds some nice dubby elements to his repertoire. The first track is low-key and almost easy listening, but the album picks up with “Simple,” a dense slab of dub techno. The title track is dub-influenced as well, with a heavy helping of echoey textures over a hip-hop-style beat. “Low Company” and “Drive” bring the same flavor to glitchy beats.

There are traditional IDM tracks here too: “Conjecture Correction” and “DmFm” are both downtempo. The former is jazzy, while the latter is Merck-like. I wonder if this album combines older and newer material, or if Jase Rex intends to continue working in a wide range of styles. The bass-heavy elements certainly add weight to his more abstract noodling, but I feel Rex is still in search of his own voice.