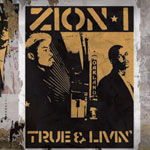 Zion I’s third album hearkens back to the glory days of hip-hop. On “Doin’ My Thang,” jazzy live horns accompany smooth, literate rhymes. MC Zion contemplates why he raps, citing fame and female inspiration. “Bird’s Eye View” is even catchier, with orchestral samples, deep bass, and a captivating melody. MC Zion raps a love song, cryptically exclaiming, “Since I met her every moment’s like a leap year.”

The hits keep on coming! “The Bay” has double bass reminiscent of Tribe’s collab. with Ron Carter. Zion’s lyrics take a serious turn, mentioning an “AIDS epidemic that can end you too.” The funky, upbeat chorus balances his cynical catalog of Bay Area characteristics. “Soo Tall” has an unusual sound, like a high-tech hoedown with soulful female vocals. Another highlight is “Poems 4 Post Modern Decay” featuring several surprisingly serious (and interesting) verses by Aesop Rock over a powerful jazz bassline, electric guitar, sitar, and radio squelches. The production gets especially far out at the end as Zion’s lyrics become more and more paranoid: “Space-age Patriot Act (they got your phone tapped, cousin)….” This is probably my favorite track on the album.

With diverse, cutting-edge production courtesy of Amp Live, and guest spots from Talib Kweli, Del, and Gift of Gab, this album is like a who’s who of left-coast underground hip-hop. While the second half of the LP is a bit uneven, there are so many amazing tracks (production and lyric-wise), True & Livin’ is bound to become a classic.