Venetian Snares: Winter in the Belly of a Snake 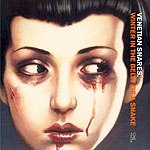 Aaron Funk has dispatched one of the most flawless records in what could be called the “post-Squarepusher scene.” Mature, dark and aseptic, the album is filled with details and nuances, authentic jewelry for the trained ear, that invite the listener to plunge into these sixteen tracks again and again. Venetian Snares has tossed the sonic palette and gone to the paint shop for something new. Armed with this revamped arsenal he has polished his beat-programming technique to deliver what is probably the first album he has produced with total control over his musical powers.

The trimmings are menacing and pseudo-industrial, menacing as if you were blinded by 300 watt bulbs in an operating room; industrial as if you were about to receive a thorough skull drilling from a robot surgeon.

Tracks such as “Dad” (where Aaron sings for the first time) and “Stairs Song” or “January,” are genuine gems of derangingly fast-BPMed music. Sick? Violent? Stark? Yep, yep, and yep. But also and above all an aural delicacy for those well-versed in the celerity of deceitful arrhythmias.

Without a doubt his boldest work so far. And that is no mean feat.