Ultre: All The Darkness Has Gone To Details 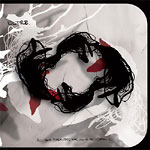 Ultre is Finn McNicholas, a 24-year-old musician from Barnsley (UK) whose attention to detail has summoned the interest of Audiobulb Records. His debut album possesses an immediately well-defined style and confidence based upon a series of tracks with well-composed melodic, percussive and structural design. Acoustic piano motifs abound from the beginning as “Pictures Of Piano Notes” progresses across triplets of notes and crescendos of violin. Whilst the sound palette is distinctly within a modern compositional mode the percussive elements skitter and roll with a distinct Asian/IDM hybrid force. Ultre works an engaging mix throughout this album without falter. Track after track of developing melody and rhythmic wanderings produce a steady and mature narrative. Powerful details emerge through the evolving guitar of “Massive Things In Tiny Hands” that builds and flows with seamless joy. “Bricolage“‘s skittering rhythms present a contrast to the stilled ambience of the textural pads, each wave of percussion rolling like a bongo and tabla piece from classical India. “Phrotos” presents voices and deep kick drums moving forward with a steady certainty. “In The Nerves” is distinct, tortured, and unresolved with its strange bowed string guttural sounds merged with distortion and beats.

In summary Ultre’s work is mature and engaging beyond his years. However, maybe this is not so surprising when you read his press release. With a pedigree in animation his work has featured as a part of the ongoing Warp Works and 20th Century Masters tour which has reached Europe’s most prestigious venues. He has played live with artists from Planet Mu such as Tim Exile, Max Tundra and has featured alongside Battles and Clark on the recent Overkill compilation (LittleBig). All The Darkness Has Gone To Details is a very good debut and clear indicator that Audiobulb has its eye on the up and coming talent of tomorrow and today.