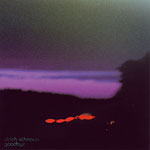 This release is a huge disappointment. Schnauss’ Far Away Trains Passing By on City-Centre-Offices was a last-minute addition to my 2001 top ten list, but after repeated listens I decided it was too simplistic to keep. This is Schnauss’ third album, and it is New Age rock pop chillout with singers throughout. On the opening track, “Never Be the Same,” chords build and wash out without ever forming a solid melody. On “Shine,” three male vocalists and a couple of guitarists contribute to a heart-felt but light-weight ballad. Excessive reverb seems more muddy than moody. “Stars” is similarly muffled, with live drums dissolving into echo chamber hell. Even the singing (in English) is difficult to decipher. “In Between Years” wavers between channels but otherwise it’s probably the subtlest composition. “Here Today, Gone Tomorrow” has Philip Glass-like pulses, but they are offset by more murky drumming and voices. By the soggy guitar feedback of “Medusa” I’m ready to through this CD out the window.

I almost feel bad being so hard on this album, since it was obviously an emotional project for Schnauss. Unfortunately, this is the type of music which I do my best to block out when it’s inevitably played at certain clothing and tea stores. It lacks any sort of experimental or original edge, becoming simply shallow background sound.