Various: The Fire This Time 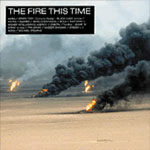 The timing on this release is chillingly appropriate. While the U.S. and its allies march toward seemingly inevitable conflict with Iraq, this audio documentary presents a history of Western influence in the region. Grant Wakefield combines succinct narration with news coverage samples, sound effects, and electronic music from the likes of Orbital, Aphex Twin, Speedy J, and Bola. A second disc provides an instrumental version, but the real meat here is the political commentary.

Wakefield’s audio essay describes the history of Western influence in oil-rich Iraq. The climax is a depiction of the Persian Gulf War in all its stupefying glory. While the media unquestioningly accepted newly coined euphemisms for the slaughter of fleeing soldiers and civilians, and sound bytes of political propaganda spewed from every TV set, the U.S. military was burying Iraqis alive in the desert. This CD pays particular attention to the beginning of the conflict—Iraq’s economy was hurting from its Western-funded war with Iran, Kuwait was driving down oil prices, and Saddam Hussein thought he had the Bush administration’s word that the U.S. would not intervene if he acted against his neighbor. It also focuses on Western propaganda efforts to vilify the enemy, from endless discussion of Scud missiles, which were apparently never a serious threat, to false testimony about Iraqi soldiers killing Kuwaiti babies.

This certainly isn’t easy listening, but it is an important release. Sweeping economic sanctions, not to mention lingering radiation from depleted-uranium shells are still causing death and suffering in Iraq. An essential element of democracy is the ability to speak out about our government’s policies. If only pop stars would rally around a cause like the plight of Iraqi children, rather than the cookie-cutter issues that make the news, the typical American might actually demand change. Leave it to electronic music on an independent label to lead the way. This is a powerful work of art.