The Ace of Clubs: Benefist 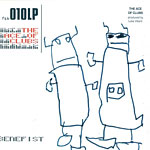 Ahhh, Mr. Vibert. What have you concocted this time? Homage to Acid House you say? How lovely. In the same vein as Yoseph released on Warp a few years ago, Luke Vibert takes his love for late-eighties and early-nineties dance music and sprinkles it with what can only be described as weirdness, but in a good way, of course. Luke just wants you to party, that’s all. No room for chin-stroking here. On Benefist we find very familiar sounds but somehow he makes them sound fresh and fun. On “Heathrow Hardcore Terminal” some reversed bass starts us off as a little keyboard melody leads us into some squelchy bleeps and dizzying synth ping pong. The juxtaposition of the breezy keyboard and the constant pound of a distorted kick and acid squelches are quite humorous. Elsewhere, on “Patriotic Acid” Mr. Vibert commands an army of computerized voices saying simply “acid” while what can only be described as an acid house preacher shouts, “Our house music.” Later a very classic sounding piano stab comes in over some wild squelching bass and 808 beats, followed by a triumphantly cheesy synth horn stab. Much of the album follows the same sort of formula; wobbly keyboards, 808s, anthemic piano stabs, and of course squelchy bass. Though true, each track remains recognizable and different somehow, preventing the album from sounding like an extra-long track with little change-ups. At 15 tracks long, it is a lot to take in one sitting. It is definitely party music, aimed for the dance floor as the artist pseudonym may indicate. It’s purely fun music and as long as you treat it that way it’s very good at what it was made for.