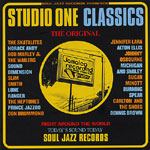 This compilation, which has been out a couple of months now, is truly a greatest hits collection for Studio One, featuring its most popular tracks, some on CD for the first time. My favorites are the short but sweet (and bass-heavy) “Rockfort Rock” by Sound Dimension, Slim Smith’s smoothly falsetto “Rougher Yet,” Horace Andy’s mellow “Fever,” and Sugar Minott’s catchy “Oh Mr. DC” An honorable mention also goes to Lone Ranger for his awesome toasting on “Automatic,” and who could pass up The Wailers’ “Simmer Down”? Although these tracks have been remastered, some were apparently taken from vinyl pressings, so sound quality is a bit variable. But you could ask for no better introduction to Jamaica’s most influential label. And this is Soul Jazz’s ninth Studio One compilation, with more presumably to come. It’s a fitting tribute to Studio One founder Clement “Coxsone” Dodd, who passed away in May.