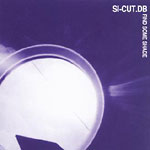 Although he’s a prolific artist, Douglas Benford’s releases as Si-cut.db are hard to track down. But they’re worth finding. Benford has an interesting style, combining low, dubby bass with glitchy washes of noise. The overall effect can best be called complex ambience. One of the most effective examples is “Fortune Meadow.” Pole-like crackles pulse over a jaunty rhythm, forming a broken echo of a house track. Next up, “Reverse Self Help” features a subtle melody over an extremely catchy bassline. It’s the happiest clicks and cuts track I’ve heard in ages. “Draft” is another highlight, with a simple chord progression which gradually stutters and distorts as the track swirls along. While Benford is from London, he’s fully absorbed the sound of Berlin dub. His music would fit right in with ~scape’s roster, and surely that’s a compliment.