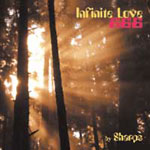 Saedos is run by two brothers, Ryan and Colin Dorward, in Vancouver. So far they’ve released one CD each. Sharps (Ryan) makes thick, lo-fi electronic funk. On “New Grind,” analogue synths squelch amidst a chunky beat. “Eyedrop” dilates distorted percussion and rolling bass. It flows right into “Buff the Mix,” an apparent tribute to Miami Bass. “Lick” is dark and tough, with old rave stabs seeping through the cracks. These four tracks could find a home on a Modern Live 12-inch.

The later tracks on this album are muddier, with some repetitive compositions and one where everything breaks down into psychedelia (“Underlying Fabric”). Nonetheless, this is a fantastic debut. Sharps and his brother both mention tree planting in their mini-biographies. They must have spent long winters with stacks of old dance records, pecking at keyboards while snow gathered outside.