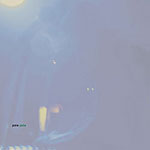 This self-titled album is a welcome departure from Pole’s trio of similar-sounding numbered releases, of which CD 1 is the best example. Some of these tracks are downright funky, melding dub, hip-hop, and glitch under smooth, articulate rhymes by Fat Jon. Further demonstrating his ability to diversify, Betke teams with Thomas Haas on saxophone and August Engkilde on upright bass for a handful of tracks. Although this is an album full of collaborations, Betke’s ear for texture shines through. And his deep basslines are still capable of bringing down the house.