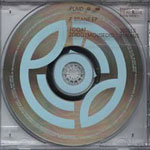 Plaid’s latest EP is short but sweet. Lately Plaid’s been on the uptempo tip, as evidenced by their last album, Double Figure. These tracks are in a similar vein, but I find them slightly more melodic. “Coat” reminds me of Skam-era Gescom, with mechanical voices burbling in the background. The slow-building chord changes overtop are simply gorgeous. Diddymousedid has a more Carribean feel, with marimbas over a snare-rush-enhanced beat. It’s nice, if a little long. “Stills” is a better balance. Breakbeats and soft, heavenly synths making for a cinematic track. Finally, “Mfaus” has an old-school feel to it, with very electronic-sounding synths and a speedy beat which gets all distorted by the end. Think of a cross between early- to mid-nineties Black Dog and AFX.

So here are four fine tracks, and a video bonus (on the CD version) to boot. Plaid seems to be evolving. Who knows where they’ll end up. As long as they keep composing such fine melodies, it doesn’t matter.