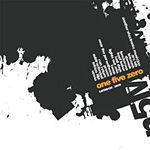 To celebrate their 50th release, n5MD have pulled out all the stops with a double-disc label overview. This collection shows how far the label has come from its MiniDisc-only days. Unfortunately, it also shows how much the IDM scene has been transformed into instrumental indie rock.

Keef Baker’s “Never” starts with aquatic synthesizers and heavy breathing, but slowly builds into a rock opera crescendo of live drums and power chords. It sounds like a trip to the dentist with some heavy drugs kicking in at the end. Tobias Lilja contributes three pop songs with vocals. (The last of which features an amusing echo effect which makes the singer sounds like Kermit the Frog repeatedly croaking phrases such as, “Open arms”!) Even SubtractiveLAD incorporates electric guitar.

A handful of tracks showcase strictly electronic offerings. Funckarma’s “Skaind” sounds like a Shadow Huntaz instrumental but for its glossy melody. “Chaika” by Vesna is also good, with distressed beats and sumptuous bass. These two tracks have been growing on me after repeated listens. By contrast, Another Electronic Musician’s contribution borders on banal. Perhaps his pseudonym works against him psychologically! Likewise, the Loess remix of “Bud” by Quench is pleasant but it dissolves from dubby to nondescript. I’m afraid the Run_Return and Proem tracks strike me as similarly forgettable.

On disc two, there’s another smattering of acoustic tracks, like Bitcrush’s “What Would Hope Be Without Disappointment.” Its reverberating guitar and drums remind me of Ulrich Schnauss’ Goodbye (which is not a good thing). Lights Out Asia’s “Psiu! Puxa!” seems similarly easy-listening. Damiak plucks a guitar and sings on “Field Lights,” but at least the beat is clever.

It’s never a good sign when (after a couple of listens) I find myself skipping entire tracks on a compilation. It’s not just that I’m nostalgic for nineties IDM. That day is clearly past. I just pine for more experimentation. Adding echo to slow guitar strumming has been done to death now. What I’d really like to hear is a virtuoso playing as fast as Tom Jenkinson on the electric bass. What happened to speed, edginess, and urgency? Most of this music sounds like it could be played on a UPN teen drama when two characters break up. I won’t write off n5MD yet, but this collection, which is meant to build excitement about the label roster, just makes me sleepy.