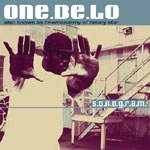 It’s been a while since I’ve been completely blown away by an album, but this one’s amazing. Not only is One Be Lo (formerly OneManArmy of Binary Star) an incredible MC, but the production here is exceptional. With jazzy, sometimes experimental breaks and socially conscious, thoughtful lyrics, there are literally no weak tracks. Plus you’ve got to respect a rapper who name-checks Alice Coltrane.

I’ve got eight favorite tracks! “enecS eht no kcaB” sounds like a Premier production, with laid-back keyboards and atmospheric scratching. One Be Lo’s rap is pure literature. He assures, “Even when I’m dissing you I’m being sincere.” “Questions” featuring Abdus Salaam and Charmaine Gibson has an even jazzier break, sounding like some ’60s-movie beatnick party. But the lyrics are serious: “Billions of dollars being wasted to drop bombs on Bedouin families/’cause they tamper with Bush’s poppy seeds… welfare recipients turn to warfare participants….” Over a lone horn, the track breaks down and flows into “Oggie” where One Be Lo raps about death and hope. “Axis” has a wicked bassline, but One Be Lo’s social commentary is even more striking. He talks drugs, violence, and religion, lamenting, “Some of us dying over a few bucks;/killer’s old enough to ride a school bus.” On a less serious note, “True Love” featuring Decompoze (who produced many of these tracks) is a love song over a sweet jazz loop.

Three cuts have already appeared on singles. “Deceptacons” got the Pete Rock remix treatment. Here it’s short and funky, about a friend who transformed into an enemy. “Rocketship” has a beat last used by Anticon. It’s a battle track that’s critical of the rap industry. Its B-side “E.T.” is an amusing, pop-culture-filled love song. Don’t let these titles mislead you—One Be Lo isn’t a sci-fi rapper. He’s bigger than that. The last couple of years have seen a renaissance of underground hip-hop, and One Be Lo’s album is among the best of the bunch.