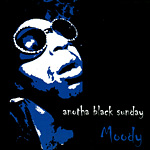 I never thought I’d be reviewing so many singles. Once again, the draw here isn’t the title track. “Desire” makes this EP essential.

“Mamma’s Hand” starts out as old-school Moodymann, with jazz samples manipulated seemingly live. It repeatedly breaks down for a smattering of vocals and even a smoke break. “…During Soundcheck” and “Anotha Black Sunday” are short enough to feel like interludes, and the latter reprises an older track. “Rectify” is made of similar pieces, and in fact is sounds like a Moodymann cliché.

“Desire,” however, is something completely new. It seems painfully personal, with slow piano and a house beat. José James breathily sings, “Some things you just gotta learn on your own.” He repeats, “She appeared in my life,” and talks of nightmares and spinning planets. It truly is a magical tune, the chant “remember” perfectly fitting its wistful jazz elements. This needs to be played late at night. A lot.