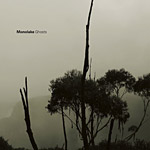 Monolake’s last few albums have been cold, digital, and distant. Ghosts continues this trend, striking an uneasy balance between dubstep aesthetics and mannered experimentation. On the title track, spikes of static and a wobbly bassline are soon joined by a whispered Mac voice declaring, “You do not exist.” Steady rim hits are almost comically loud in the mix. There’s no ghost—just the machine.

On “Taku,” artificial dribbles are joined by muted beats and long chords. There are echoes of Demdike Stare here. “Afterglow” lurches forward on an irregular heartbeat. One can’t help but admire the craftsmanship, but where’s the soul?

“Discontinuity” is a muffled, joyless affair. “The Existence of Time” resorts to sudden crescendos to grab attention. “Phenomenon” is a more successful effort, with a creepy digital wail over haunted drones and bass drops. If only it didn’t resort to clatters and squeaks. Demdike Stare’s influence is once again evident on “Unstable Matter,” with its artificially “spooky” atmosphere.

The final tracks form a distinct trilogy. “Lilith” is breakbeat and bass heavy. This may be the first Monolake jungle track. “Aligning the Daemon” introduces church organ, providing the album’s only moments of warmth. “Foreign Object” is a tangle of metallic noises and grinding bass.

Monolake’s Robert Henke is often lauded for his live shows. He has already performed some of these pieces in surround sound. Perhaps Henke’s being held back by the constraints of a 2-channel, one-hour format. This release works as a demo of sounds, but as music meant to inspire an emotional response, it is sorely disappointing.