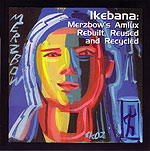 A better title for this album might be “Inspired by Merzbow.” While the compositions here have little in common with the massive wall of noise I usually associate with Masami Akita, most of them incorporate little snippets of that sound. Among the highlights is an untitled track by Plug (aka Luke Vibert) with an intense drum ’n’ bass break, rapid reggae samples, and bursts of static. It’s a pretty fierce little cut. Bola’s “Klunk” begins with a series of soft pulses. Gradually harsher sounds emerge, until a drilled beat drives the track into early-AFX territory. Negativland’s “An Actual Attack” is relatively predictable, with the Weatherman ranting about his sinuses over an old civil defense recording and bits of Merzbow noise. Finally, Mouse on Mars contributes a glitchy, abstract collage with some interesting textures.

Granted, two CDs of looped Merzbow noises over beats can be a bit much. Some of these compositions lack the joy of melody or the cerebral abstractness of noise, becoming boring hybrids. Nonetheless, a handful of these tracks are definitely worth a listen. I give this a half-hearted recommendation.