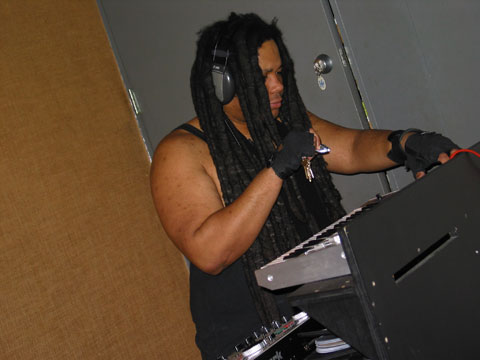 Under a big, low, hammock-shaped moon, I ventured out on a Sunday night (the slush from this morning’s storm already melted) to Rodan in Wicker Park. Noleian Reusse organizes Living Sundays, and tonight Hieroglyphic Being DJed, accompanied by an elaborate video setup. Jamal played a riveting, unmixed selection of the quirkiest techno/house tracks, which are apparently forthcoming on his Mathematics label. The lounge atmosphere provided a good setting for experimental fare. In fact it felt like a private party with Jamal trying out his new tracks on a club system and then working the room. I’d be hard-pressed to describe his new cuts individually, but they were less lo-fi than his older material, while retaining that special analogue, industrial-tinged, hypnotic style. Living Sundays presents a different set of audio and visual artists each week. With such a nice crowd, I’ll certainly be back.