Lights Out Asia: Tanks and Recognizers 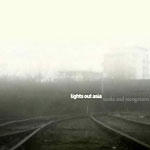 Earlier this year n5MD released the trio of Lights Out Asia’s sophomore debut. Consisting of members Mike Ystad, Chris Schafer, and Michael Rush, Lights Out Asia creates beautiful ambient post-rock that brings to mind artists such as Explosions in the Sky and Cocteau Twins mastermind Robin Guthrie. While not quite as concerned with tense build-ups as other post-rock outfits, Lights Out Asia makes for perfect nighttime music, whether lying in your bed, on the brink of lights out yourself, or just relaxing on a cool evening. Atmospheric pads and delayed guitars swirl perfectly around subtle, IDM-style drum editing. There are vocals on about half the album, but they are few and there are no hooks. Often the vocals come across as just another instrument in the dense compositions, never distracting. This truly is a musical album, making individual song discussion irrelevant.

Tanks and Recognizers is meant to be taken in fully and completely; however, I believe the true centerpiece of the album, must be “March Against the Savages.” It starts off with guitar arpeggio and what sounds like distant birds chirping, and then a melancholy lead swoops in with a nice, shuffling rock beat. Electronic squiggles bounce around until a belting vocal comes in to finish the track in grandiose style. Like much of the album, the song feels short even though it weaves and climbs for nearly eight minutes. If I had to sum up the sound in only a few words, I think I’d dub it futuristic space lullabies.