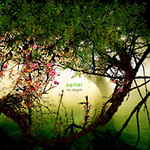 As much as I love Kettel, this album’s not as good as last year’s Through Friendly Waters. The title track is very Plaid-esque, but it’s more rhythmic than melodic. “Mauerbrecher” is fun, with thick bleepiness and beats. It’s not as emotional as most Kettel, though. There are some shorter tracks that seem more like interludes, with meandering sound doodles and even vocal samples. “Halt Him” and “Choo Choo India” are ambient with ocean sound effects. Other tracks are atonal and strange. “Little Tongues” is dizzying, yet strangely empty. On “Mannschaft,” notes collide like a Boards of Canada tape gone awry. “Follow Me!” is a highlight, with electronics playing off a brief piano loop, but it gets repetitive after a while. “The Second 2006” sounds like two songs colliding. Its speedy 303 bleeps remind me of AFX’s Analord series.

My Dogan has the feel of a sonic scrapbook. There are moments that stand out, but Reimer’s own style seems buried under a barrage of influences. I hope his next release sees him finding his feet again. (In the meantime, I’ll be playing his Machine Drum mix over and over!)