Jus Allah: All Fates Have Changed 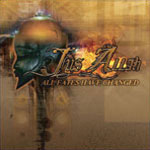 Jus Allah, best known for his association with Jedi Mind Tricks, released his first solo album last month. There are a handful of good cuts, but the LP is marred by uneven production and crude lyrics. The high point is “Pool of Blood” with a guest spot by GZA/Genius. Scratched samples and grimy verses make for a quintessential horrorcore track. Jus growls, “I keep chunks of flesh underneath my claws.” “Hell Razors” featuring Evil Dead is similarly dark and clammy, with bloody verses over an ominous break.

Unfortunately, poor production and absurdly violent lyrics make for some seriously weak tracks. On “Supreme,” Jus goes on a homophobic rant over irritating high-pitched electronics. Thankfully the “Black God’s Remix” drops the offending verse and adds some sweet scratching. “Tomorrow” is a cheesy guitar loop over a feeble beat. The hook is just embarrassing. Even Lord Jamar can’t make up for the silly guitar sample on “Important Shit.” “G-O-D” sounds like it was composed on a cheap Kmart keyboard. This CD might be worth copping for those who missed the 12-inches, but it’s a disappointment for anyone seeking a solid album.